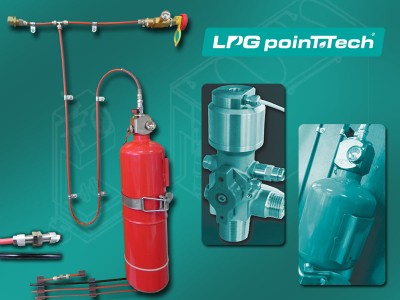 LPG Point Tech System is a simple automatic fire detection and extinguishing system by means of a flexible detection and discharge pipe, specially designed for application where the fire hazard is located in areas difficult to access. The pipe is heat sensitive all along its length, equivalent to an infinitesimal line of fire detectors. Detects and extinguishes fire at its first stage discharging the extinguishing agent directly at its source.

It is specially suitable for applications where the potential fire risk is located within enclosed or confined areas, such as, electrical cupboards, control panels, fume cabinets in laboratories, automatic cashiers, paint booth, machinery rooms in yachts and vehicles, baths, buckets or tanks filled with flammable materials, and many others.

Employs a flexible tube pressurized between 10 and 18 bar, for fire detection and discharge of extinguishing agent. When a fire occurs, the increase in temperature softens the LPG PoinTTech® tube and bursts at its hottest point (between 80 and 110º C), which coincides with the source of the fire. This rupturing operates as a distribution nozzle that discharges extinguishing agent directly, and quickly to the source of the fire, at its first stage. Direct system is suitable for total flooding applications for small area coverage of 5 m3. Standard equipment includes pressure gauge, by-pass valve for connection to LPG PoinTTech® tube and coupling to pressure switch.

LPG PoinTTech® pressurized tube is only employed for fire detection. When the tube bursts due to increase in temperature, it decompresses and opens the cylinders valve, thus discharging extinguishing agent through one or several lines of nozzles located inside the enclosure to be protected. The indirect system is suitable for total flooding applications in areas larger than 5m3 and for local applications for special hazards in open areas. Standard equipment includes pressure gauge, by-pass valve for connection to LPG PoinTTech® tube and two discharge outlets. With this system it is possible to use system manual actuation.